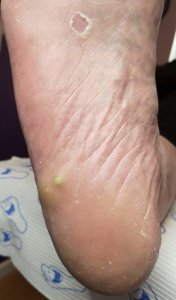 Malcolm had suffered for 2 years with a painful foot, he thought he had a Verruca. He treated it at home with the usual preparations, it didn’t go and got more painful. He complained to his wife (a lot), he complained to his practice nurse (she gave him some ‘stuff’ to use), he put salicylic acid on it in varying strengths. All to know avail and Malcolm’s foot was still sore.

After 2 years of listening to him complain and hobble about, becoming less and less active, unable to walk the dog (something he loves); his wife decided enough was enough and she was going to find him a podiatrist that could help him get rid of this ‘verruca’.

We were email penpals for a bit while she got the chance to get to know me some more and ask me questions about the verruca treatments I do. I sent her links to my (many) blog articles – I think she could have delivered a scientific lecture on verrucas by the end of it! I wanted her to know I was a practitioner she could trust with that ‘verruca’ problem, by now, severely impacting them both.

She decided I was ‘The One’ and booked Malcolm in to see me.

I had made a huge mistake! 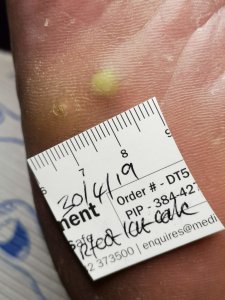 How it measured up

As soon as I saw Malcolm and examined his foot I realised I had fallen into the trap of making wrong assumptions! #EPICFAIL #schoolgirlerror

I had assumed I knew what his problem was without even seeing it because of everything discussed prior to the appointment. That is super dumb, and an error even a student podiatrist wouldn’t make! I kicked myself (a lot). How could I be so stupid with all my years of experience?!

In my line of work, us professionals really HAVE to see things and examine them to be able to diagnose them properly. This is a classic case of why that is so important, and why (after 28 years in practice) I need to be less presumptuous and less stupid in attempting to make a remote diagnoses!

It wasn’t a verruca.

I knew it as soon as I examined it up closely. It was a foreign body, 1 inch in length. On top of that, it had been treated as a verruca with acid! For someone on a blood thinner like Clopidogrel that is not a good idea!  In case you don’t know, acids breakdown skin, which is what you want in a ‘healthy’ person if it is a viral skin condition like a verruca. But, if you’re on blood thinners, you don’t want a skin breakdown as it can create an ulcer (podiatry speak for an open sore) that can get infected and potentially lead to sepsis.

This was an important lesson for both me and Malcolm. I learned to be less ‘Little Miss Know-it-all’. And Malcolm learned that when you have a problem with foot pain, seeing a podiatrist is a good idea! Feet are what we see all day every day,  we’re the best people for a good chance of fixing it.

Don’t worry, this story comes with a happy ending for Malcolm and not just morals to our tale.

Although I saw a ‘black dot’ in the suspected verruca (which is bad), my gut instinct told me it was not. I explored around and my gut was right! (always trust your gut!)

What I discovered was a foreign body: a 1 inch piece of wire (I thought it was a dog hair at first),  fine wire that had been embedded in Malcolm’s foot for 2 years!! #facepalm! Turns out our Malcolm has a model making hobby involving use of his dremel with its wire brush attachment , which sometimes sheds fragments of wire and doesn’t mix with his habit of walking around in bare feet. (Puts a new slant on the term #warringtonwires I guess!)

Thank you Malcolm, and I’m so pleased we found resolution – and you’re still smiling!

Till next time, hugz

Let's Talk About Your Feet

Get In Touch Now