How confident are you about separating the Facts from Fiction?

Lets see how you do with the statements below:-

Psoriasis is not infectious, you cant catch it

Fact:  Psoriasis is a long term disorder of the body’s internal immune system where the specialist Tcells (I call them the army cells as their job is to attack and fight infecting organisms) start to attack the new forming skin cells as if they were foreign particles (like bacteria). This causes inflammation and rapid overproduction of immature skin cells which pile up creating patches of skin plaques.

Lack of public understanding about Psoriasis means people with it often feel too embarrassed to do activities like swimming or anything else which reveals their skin.  As a result their psychological stresses can be immense, which in turn makes symptoms worse.  Facing the daily rituals of applying specific creams and ointments, sometimes 3 times a day to stay on top of the symptoms can be extremely tough for people coping with it. 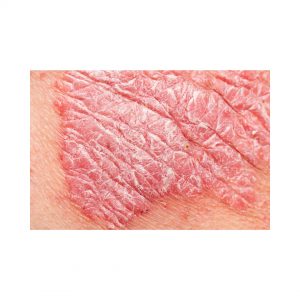 Fiction: The actual causes of Psoriasis are not FULLY understood, however it is known to have a genetic link (and can run in families) but not every family member gets it. Trigger factors include: stress, injury, infection and vitamin D deficiency.  About 10% of the population have the genes connected to psoriasis, but only about 2% of them actually develop it.

In people who already have Psoriasis, symptoms can get worse if they excessively smoke, drink alcohol, are overweight, have diabetes or are under stress.

Fiction:  Phototherapy does improve psoriasis and is available in many ‘non sunny’ countries. A few minutes of specific ultraviolet B phototherapy light, delivered over 6-8 weeks can dramatically improve psoriasis. People access it in dermatology or skin specialist centres.

Psoriasis symptoms can improve after skin exposure on a sunny holiday. Perhaps the UVB light slows down the rapid skin cell production (maybe due to cell damage)  Sun beds do not deliver the same type of therapeutic ultraviolet light as medical phototherapy.

Psoriasis is not just a skin condition

Fact: Psoriasis can affect the joints too with a condition called Psoriatic Arthritis, this affects about one third of people who have skin Psoriasis.  Remember: psoriasis is an inflammatory condition where the killer T cells of the immune system make a ‘mistake’ and start to attack normal body cells, like skin and joint tissue. Instead of the T cells purely targeting the ‘baddies’ like bacteria and viruses they attack the developing skin cells causing the rash people get with psoriasis. BUT in some cases they also attack the joints, just like Rheumatoid Arthritis, (another auto immune disorder). 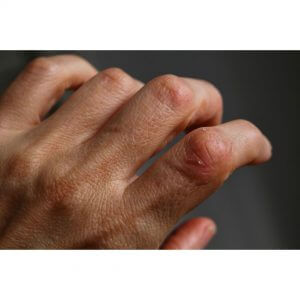 Too much PUVA treatment for psoriasis gives you skin cancer

Fiction: PUVA (Psoralens Ultraviolet A) is a combination drug and phototherapy treatment that has been used for over 30 years. PUVA has transformed the lives of many people with skin psoriasis when other treatments have failed. A single course, administered over several weeks would be 15-25 treatments. Potentially producing months or even years of remission.

We know exposure to ultraviolet light is both beneficial (vitamin D production) and potentially harmful (skin damage and premature aging effect). In theory you could expect the risk of skin cancer to increase after multiple PUVA exposures, however the evidence does not appear to support that view.

You can get Psoriasis in or on your feet

Fact: You can get two types of skin Psoriasis on your feet (and or hands) one is the milder type producing dry scales which may look like patches of hard skin, the other much rarer one is called Pustular Psoriasis where pockets of yellowy fluid appear in small patches called pustules, it isn’t infected like usual ‘pus’ you see in wounds, but it looks similar. 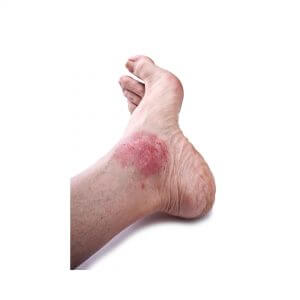 Psoriatic Arthritis, affecting the joints, can develop in about one third of people with skin Psoriasis .  The joints become inflamed and sore in a similar way to Rheumatoid Arthritis.  It can happen in any joint including those in our feet.  Both Psoriasis and Rheumatoid Arthritis are autommune,  inflammatory disorders where the body attacks itself. Both conditions often require anti inflammatory drugs like steroids to improve symptoms.

This is why people with Psoriatic arthritis are often referred to see a specialist in Rheumatology & Autoimmune disease.

You can’t get Psoriasis in your nails

Fiction:  Both skin and nails are made of 2 types of keratin (type of protein), in Psoriasis the Tcells of the immune system make a ‘mistake’ and ‘attack’ the normal keratin producing cells as if they were the ‘enemy’ (like a bacteria) this produces inflammation and cell damage. 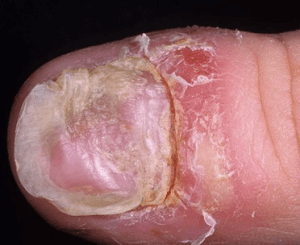 Nails change in appearance and can get thick, flaky and or separate from the nail bed (called onycholysis).  This can look very similar to a fungal nail infection. It is easy to confuse the two conditions on appearance alone.  Can you imagine the frustration for someone with psoriatic nails using an antifungal treatment on their nails for months and not seeing any improvement?  Getting the correct diagnosis at the start is so important if we are to help people with this problem. Treatment wise, we reduce the thickness of psoriatic nails, apply a re-conditioner and they look so much better afterwards. Managment of symptoms is our aim, as a cure is currently unavailable. 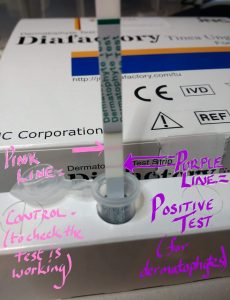 Why do we test for fungus at Lane Ends Podiatry ?

To get an accurate diagnosis, and select the right treatment for our clients.  We use anti fungal medication to treat nail fungus, it is ineffective on pure psoriatic nail.

I hope you have found this blog helpful, if you have any comments or questions you would like me to answer please put them below or find me on my social media channels Facebook or Instagram.

Thank you for reading to here, until next time…

PS. Did you know that the word Psoriasis is derived from the Greek ‘psora’ meaning itch, or ‘psoran’ to have an itch.

Let's Talk About Your Feet

Get In Touch Now